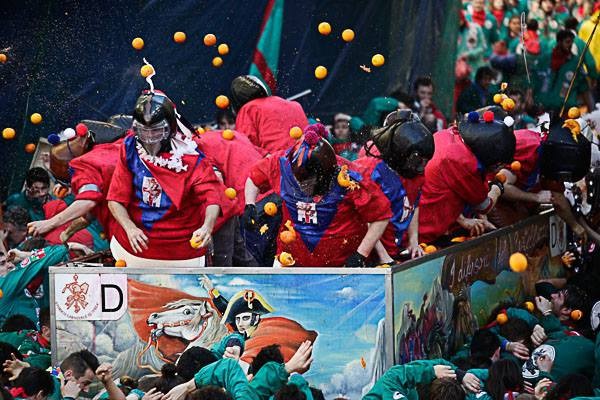 Official Website :- http://www.storicocarnevaleivrea.it
Venue :- Italy - Piedmont - Ivrea (CN)
What is Carnival The Historical Carnival of Ivrea is a unique Italian event of international importance, as acknowledged in the communication by the President of the Council of Ministers of 27.09.1956 (Sheet No. 02999/894 File 02999/894.). A “dream” that is repeated every year, bringing, history, tradition, spectacle, excitement and solemn ideals to the streets and squares of the town of Ivrea. In this event history and legend mingle to create a spectacular sequence crossing the centuries. The spirit of Carnival lives through the re-enactment of the city’s liberation from tyranny dating back to Medieval times: a baron who starved the city was driven away thanks to a miller’s daughter who rebelled against the “ jus primae noctis” and roused the people to revolt. In this commemoration every year the new version of the Carnival is celebrated as Festival involving the whole town, during which the community of Ivrea can show its self-determination. The heroine of Carnival is the Miller’s daughter (Mugnaia), and at her side the General (Generale), who since the early 1800s has had the task of assuring the smooth running of the event, along with his Napoleonic General Staff ( Stato Maggiore), composed of brave officers (Ufficiali) on horseback and pretty sutlers (Vivandiere) . Completing the gallery of historical figures are the Assistant Grand Chancellor (Sostituto Gran Cancelliere), Magnifico Podestà guarantor of freedom in the city, the parade with the Flags of the Parishes (Bandiere dei Rioni) represented by the Abbà and the Pipes and Drums (Pifferi e Tamburi). To fill the city with colour and scents, there is then the famous, spectacular Battle of the Oranges, in which the fighters identify strongly with the people’s rebellion against tyranny. In the battle the people, represented by orange throwers on foot without any protection, pelt oranges at the feudal lord’s army, personified by others throwing oranges from horse-drawn carts, who wear protective masks reminiscent of ancient armour. In order to show their involvement in the event, from the Thursday before Lent all townspeople and visitors who take to the streets wear the “Phrygian cap” (“Berretto Frigio”), a red stocking-like hat that shows their support for revolt and therefore their aspiration to freedom, as it was for the heroes of the French Revolution.